Find your holiday on the Norfolk Broads

Superior Battery Management
Moor your boat anywhere and still have the power to run your boat. See luxury boat hire.
Microwave
We're not sure you need a description of this !!
Single Floor
Once you are on board, the boat is flat, no more steps between cabins.
Elite Fleet
Our best range of boats, offering a touch of luxury onboard.
Electric Anchor Winch
Press a button and your mud weight is lifted, no need to hang over the bow and heave.
Bow Thruster
A small "engine" that pushes the bow of the boat left or right making mooring easier.
Wi Fi Onboard
Boosted WiFi - providing a slightly better signal than your mobile.
Dual Steering
You can steer the boat from inside or outside - depending on the weather.
Mains Power
These boats have at least one standard 3 pin plug on board. (Many boats have plugs in each cabin, but not all)
Shore Power
An extension lead for boats that can be plugged into bollards on the shore.
Sliding Canopy
Canopies can be pulled back on sunny days to let the outside in.

Customers celebrate 50 years on the Broads 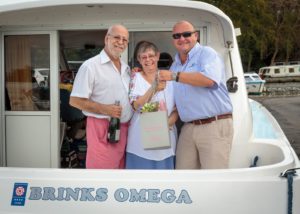 Barnes Brinkcraft customers Steve & Christine have embarked on their 50th holiday on the Norfolk Broads with a trip onboard one of their favourite cruisers ‘Brinks Omega‘.

As a thank you to the couple for their years of continued loyalty, the Directors have gifted them this year’s holiday with a presentation made on their arrival on Tuesday.

Director, Daniel Thwaites said “we are so pleased that Steve & Christine have chosen to return to us each year for their holiday. They know which boats they like, and will often holiday on the same boat for up to 10 years.  They really are customers turned friends, and we look forward to seeing them return to the yard every summer.’

Steve from Essex, first started holidaying on the Norfolk Broads as a teenager after a relative moved to Lammas, near Buxton.  His first trip to the area was with a friend in a wooden boat which they rented from a boatyard in Horning. Since then he has continued to return year on year, firstly with friends and then with his wife Christine who has been holidaying on the Broads almost as long, since 1974.

Christine & Steve had their honeymoon on the Broads and then continued to take holidays after having their son, enjoying many happy holidays throughout his  childhood and beyond.

Have you had a long love affair with the Norfolk Broads? or have you been coming to Norfolk for as long as Steve or Christine, or even longer?  Did you get engaged or even married on the Broads? We’d love to hear your stories and see your old holiday photographs – please email to kerry@barnesbrinkcraft.com 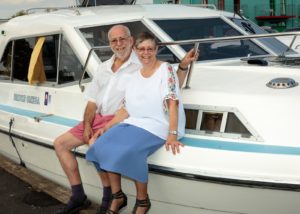 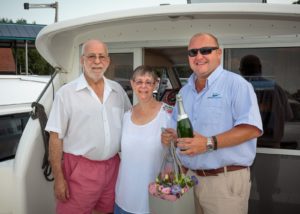